“BEWARE! BLUE WHALES ARE EVERYWHERE!” was a Youth Exchange that took place in Sarata Monteoru and Buzau between 7-17 May of 2018. Partnership consisted in 43 participants from 8 countries, including Italy with the NGO “Associazione Joint”. Aim of the project was to increase security of using social networks by youngsters 18-24 years old and rise their role and responsibility in prevent and eliminate electronic violence and its effects. The methodology of the project was based on non formal education and consisted in games, presentations, workshops, role plays and and theaters and etc.

The first day of the project started with the name games and individual presentations in order to get to know each other. After that, all participants stated on papers their “fears, motivations and expectations” about the project. In upcoming session we got general information about Erasmus+ program, Youthpass and its key competences. This session was followed by presentations of of the stereotypes in each country using short plays to make people aware of misperceptions and generalizations among European nations.

In second day, it was organized land art activity to let participants show cyberbullying issues in a creative way. Trust games and team building increased team spirit and strengthened unity among us. At second the second half of the day we had two different sessions about social networks and e-violence in our countries. We prepared the sketch of the situation in Italy and had discussions with other participants. Later we had a chance to meet with an expert whom shared her experience in this field. First intercultural evening has been done by 4 countries including Italy presented some information about the country, dance, music, food and etc.

In third day, all the day were done with different workshops. At the beginning we discussed thr cases of e-violence in our countries, causes, victims and effects of it, and later prepared role play to show what we can or can’t do in social networks. The day finished with the second intercultural evening.

Then in next days we started to find out solutions to the cases of e-violence in different societies and have done open discussions about it. The day followed by the fish market that we were divided into some groups to create future project together. Later, we were given sessions about Blue Whale campaign, information about forum theaters, video and media print activities.

We all voted what part we are eligible to work on and created our own products by preparing scenes, video and flyers. As it was the first hardworking day, the trainers taught us what to do step by step and was checking our team work performance regularly. We improved our ideas and performance on these fields. All of this were presented in next session, and discussed each details with the trainers before the final version. First time of the presentation was done in the evening.

We had a trip to the muddy volcanoes and other attractions near the region in the morning. After the trip we changed the location to Buzau. During the day we had a chance to work on drawbacks and lacks of the our work.

In last day we presented the final version of our scenes in front of the local youngsters of Buzau. The flyers and videos were presented them in order to show the importance of the e-violence and cyberbullying in societies. Forum theaters played to the public. The last activity of the project ended with the farewell party.
As a result, this project had a great impact on youth from different parts of Europe to show them the realities of the social network issues, cyberbullying and e-violence, all of us worked on different activities to improve our knowledge on this topic and contribute to the our societies, schools and work places.

We're not around right now. But you can send us an email and we'll get back to you, asap. 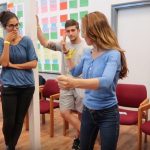 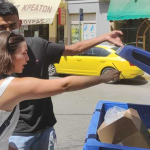